Traveling abroad means learning how to use a bidet for the first time, warm hospitality from complete strangers, wonderful and unusual smells of exotic dishes, idyllic views thought to only exist on the cover of National Geographic, and music that makes you feel like you’ve journeyed to another dimension. Experiencing a new country is about piquing curiosity, feeling vulnerable, and, at times, losing yourself—being thrust into a place so different from home that you nearly forget your previous life. International travel also means missed flights, lost luggage, gastrointestinal issues, relentless mosquitos, and getting stared at by locals like you escaped from a zoo.

I have been a nomad ever since I can remember. I’ve lived and attended schools overseas. I learned Spanish in Costa Rica, Urdu in Pakistan, and studied French under a Moroccan tutor in the US. I swam in the Nile River and Dead Sea. I dreamed about returning to the Taj Mahal with my future wife, had to politely decline a madam offering me one of her fille de joie in Beijing, and fell in lust in New Zealand. I hyperextended my knee on my trek to Machu Picchu after eating roasted Guinea Pig, experienced a spiritual cleanse with a traditional medicine man in backcountry Kenya, and took a life-altering ayahuasca journey with a shaman in the jungles of Ecuador. I’m not the typical stand-in-line tourist, overly eager to get that Instagram worthy Eiffel Tower selfie.

However, it is common for many to dream about leaving the comfort of their homes and daily routine to lay on a hammock in a Hawaiian shirt and sip on a frozen margarita for a long weekend in the sun.

There are tourists that vacation, not for the sense of thrill, the experience, nor to learn something new, but to temporarily escape their lives. And they are willing to pay for it. Tourists with enough luggage to make one wonder if they are changing residences rather than spending a few days away on their holiday. I’m talking about the resort-goers. Making a few trips to Cancun is hardly travel as far as I’m concerned. A similar experience can be had at any chain of hotels in nearly any major city in the world. These travelers can be demanding and inflexible because of their expectations. If you’ve received a Hard Rock t-shirt as a souvenir from a family member upon return from their vacation, there is a strong probability your aunt and uncle are resort travelers.

On the opposite end, there is the ever-popular method of tourism: budget travel. Frequently referred to as backpackers, these explorers try to squeeze the most experiences out of every dollar spent, hardly spending more than a few days at each destination before quickly moving on to the next town. Hostels are crammed with these budget travelers that appear to always be prepared to go on hikes or find the nearest adventure sport with their incongruously expensive gear. They are not scared to take the local bus system but normally don’t eat alongside locals, instead one may encounter these frantic travelers in groups at restaurants or bars with the word “backpacker” in their name.

Recently, there is a rising trend in digital nomads. They vary wildly but are usually younger professionals. They take advantage of the conversion power of the dollar, euro, or pound to local currency that gives them a very comfortable lifestyle in countries with a lower cost of living. Similarly, retired expats or those working for companies or NGOs overseas can enjoy the power of their local currency. Obviously, a main difference from digital nomads is expats tend to live in these foreign locations for years or decades.

Since the end of 2020, I’ve explored four continents and twelve countries. Traveling today looks different than how it did pre-COVID. I’ve had to keep my finger on the pulse of countries’ requirements, as they open up to tourism. Things can change in an instant and make travel even more difficult than it already is. And some tourists, I’ve found, make life more problematic than it should be for everyone.

Although heavily dependent on tourism, Asian countries were slow to open their borders. In October 2021, Bali announced they were finally accepting tourists for the first time since their COVID shutdown in 2020. An Indonesian official, Luhut Pandjaitan, said, “We’ll aim for quality tourism in Bali, so we won’t allow backpackers to enter.” I found that statement peculiar. Interestingly, even though travelers from the United States account for a large percentage of tourism to the island, it didn’t initially make the cut. Apparently, foreigners present the biggest challenge for refusing to adhere to measures set in place. In nearby Thailand, the country had to institute harsh penalties for those not wearing masks or adhering to other Covid-19 protocols. This specific behavior sounds eerily similar to that of many travelers I witnessed in South and Central America, and more recently Asia (especially Thailand and Bali).

Regardless of which category of traveler, increasingly, you’ll find it’s Americans and other Westerners that have a derisive attitude towards locals that will naturally get them the middle finger behind their backs. Since the pandemic this has only been exacerbated. They’ve been found to pompously tout wild, conspiratorial theories and attempt to insist that foreign traditions conform to US (or other Western) standards with incessant tantrums broadcasting their “rights” to anyone who will listen. Even more detestable are an unusual offshoot of these impudent travelers that have somehow made their way all over the globe. Although this special breed can be found at nearly every hostel or “backpackers lodge,” they are not backpackers. A true backpacker has quality gear and hiking boots—not oversized packs and sandals, a telltale sign of this peculiar genus of tourist. No, I’m talking about the wooks. This eccentric and unmotivated bunch are normally very friendly, but they seem to be the world’s rejects, outcasts, and socially inept with even stronger conspiratorial beliefs. And it’s clearly becoming a problem for genuine backpackers and other western tourists receiving the blame.

Unfortunately, US citizens are generally viewed as loud, rude, and arrogant across the globe. When I hear an American accent at a café overseas, I go elsewhere to not be associated. I once was told to go “fetch some chai” in an office setting by a fellow American who mistook me for a local because I wore the traditional dress in Islamabad. There seems to be little respect for the land we are visiting. It’s as though Americans see themselves as a customer in a foreign land and all locals are their waiters. Instead, I believe we should absorb the culture.

I prefer a method of travel that is, most likely, not for everyone. Cultural travel is humbling and childlike in many ways. You fumble through foreign languages and carefully count colorful currency in front of a cashier, like a young kid buying a Choco Taco from the ice cream man driving through your neighborhood using crumpled dollar bills and quarters. And your first ride in a rickshaw (or tuk tuk) is as exhilarating as the day you learn to finally ride your bike without training wheels. Even a seasoned traveler is open to humiliation in front of a group of denizens while learning new customs in order to be accepted. This could mean inadvertently offering a piece of food with your left hand where it’s taboo, having to be taught how to eat a dish for the first time in a public restaurant surrounded by watchful eyes, or not having cash to pay a cab driver because debit cards aren’t universally accepted.

I am amazed when I hear people ostracized for cultural appropriation when doing something as small as getting their hair braided or trying to espouse traditions they genuinely admire. What locals anywhere appreciate are foreigners trying to adopt their customs, that for many, are embedded deep in their society. I’m not talking about being flamboyantly stereotypical. Cultural assimilation doesn’t have to be the goal either but making an attempt to order food in the local tongue will go a long way to help you identify with your hosts. Why are you traveling in the first place? It should be to step in someone else’s shoes, however briefly. Blend in.

You most definitely will be pushed out of your comfort zone to fit in. A dish containing raw pork and blood may be offered and you have to fight paralyzing fear to respond with a nod and smile while chewing. You might stay on a lawless Caribbean island where crackheads scream obscenities at no one in particular and pigs get slaughtered at 7am just outside your bedroom window. Maybe two tiny, innocent looking gypsies successfully coerce money out of you by threatening to cast a magic curse. Or if you’re fortunate enough, staff at a park in Costa Rica will tell you it’s “good luck” when an angry monkey urinates on your head. We must embrace the good, the bad, and especially the weird, for a fully immersive experience.

As a strong advocate for travel, I believe everyone should fly off to a distant land after high school, preferably a developing country. You don’t have to live like a local, but at least try to understand our fellow inhabitants of this planet. If you allow yourself to just open your ears, eyes, and heart, you will put yourself in a position to enjoy marvelous escapades that very few can speak of. In doing so, you will gain a fresh perspective that will give you both a high regard for abroad and a renewed gratitude for home. My hope is that the people I meet as I explore the globe realize that most American travelers aren’t defiant, rigid, or disengaged—but, instead, we are respectful, open, and looking to gain new insight. I will continue to learn languages, get lost on buses heading the wrong direction, eat food so spicy I temporarily regret it the next day, and learn new, interesting customs as I travel from place to place as a visitor in a truly awesome world. 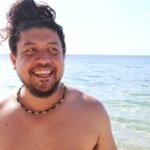 Trevor Davis is a travel writer, cidermaker, content creator, and musician. He scours the earth searching for culture to absorb. 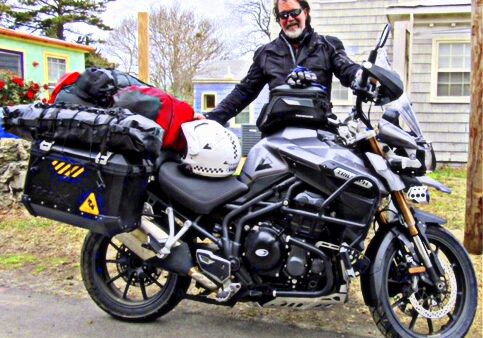 My Nomadic Experiment: Reinvention, Transformation, Stepping Off the Edge

“Because in the end, you won’t remember the time you spent working in the office or mowing your lawn. Climb that mountain.”…
By Morgan StaffordSeptember 10, 2022 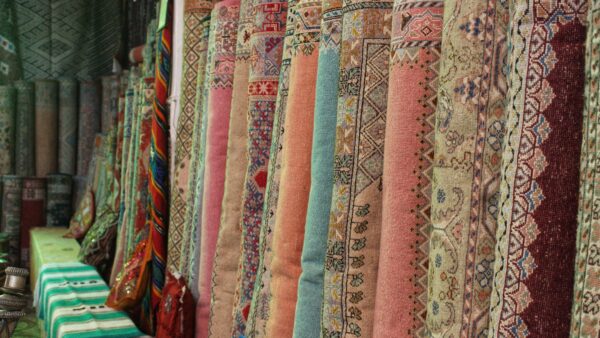 10 Days as a Woman in Morocco

As a woman traveler, I experience things differently than my male counterparts. I don’t typically travel to the places that are going…
By Amber LaChelleAugust 2, 2022 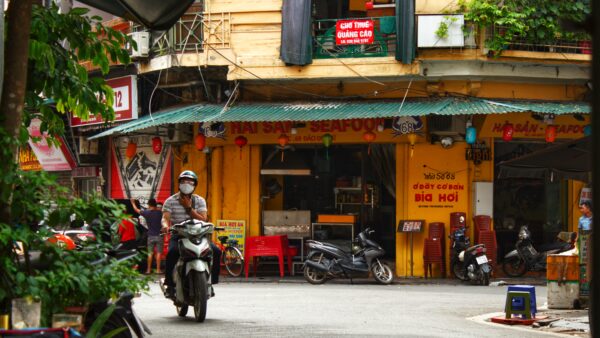 I never intended on Bali being a destination. Traveling throughout the pandemic wore on me. Restriction after restriction, QR codes along with…
By Trevor DavisJuly 19, 2022